Well, the Lone Ranger and Tonto
They are ridin' down the line
Fixin' ev'rybody's troubles
Ev'rybody's 'cept mine
Somebody musta tol' 'em
That I was doin' fine

A shiftless feel to this lyric, anchored by the love he goes on to express.
Posted by Gordon Cheng at 19:34 2 comments: 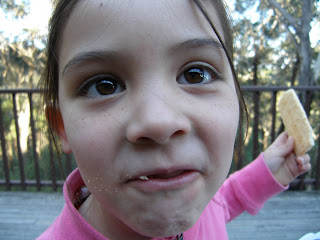 Here's my favourite middle daughter, on holiday at "Leura's place".

Reminds me, I better work out what we're doing this year. Maybe a trip to Melbourne.
Posted by Gordon Cheng at 10:17 3 comments:

I got approval from Lt-Col Mick Mumford of 3RAR and from Tim Booker to post this 9 minute version of Col. Mumford's speech at Tim Booker's commencement for ministry at Guildford Anglican.

If you have broadband it is well worth a look (with apologies for the first 45 seconds of random pictures of the back of people's heads, and the general hand-held quality). It is an extraordinary testimony to the work Tim did as chaplain to 3RAR.

On the subject of how to attract men to church, there are some really good things said. Col Mumford's view was that Tim commanded attention to the message of the Bible essentially because he spoke with conviction from Scripture, and acted with integrity.

I don't think there is much more of a trick to men's ministry—or ministry to anyone really—than imitating Tim's approach.
Posted by Gordon Cheng at 09:43 No comments:

Fell into bed at about 7.30 last night, too tired to even eat dinner. I have a vague recollection of Fifi putting girls to bed. I woke at 3 am, had a shower and went back to bed for another three hours.

I demand a pay rise

There's an article in the March 2007 edition Quadrant magazine entitled "The Anglican Puritans of Sydney". In it I'm named as a "prominent diocesan ideologue". This is alarming. I am going to phone Archbishop Peter Jensen and demand a pay rise.

It is not a great article. There are errors of fact, assertions without substantiation, and the usual self-contradictory stereotypes. I really think the only way to imagine Sydney Anglicans being "pigeonholed as irrelevant sectarians" (p. 53) is if you insist on comparing them to the inbred world of Western liberal Anglicanism. We certainly are irrelevant to them, and that's the way I hope it stays.

Outside the narrow confines of the olde-worlde C of E, a statement like "I support the Archbishop of Canterbury and everything he stands for" is likely to be met with the question "Who is he again?"

Inside the narrow confines of the olde-worlde C of E, the question is more likely to be "What does he stand for again?"
Posted by Gordon Cheng at 12:59 8 comments:

I used to get off the bus at George St in front of the Queen Victoria Building. Then, about a year ago, I thought hang on, I could walk faster than this bus is going once it hits the city. So now I get off the bus at the bottom of Druitt St and walk up the hill. In the last twelve months, the bus has only beaten me up the hill once. I reckon the driver saw me jaywalking and decided to run a red light so that he'd get to the top of the hill first.

When I realized he was getting ahead of me, I was tempted to run and catch up, so I could try to persuade him to let me back on the bus. It would have slowed both of us down, but at least my record would've remained intact.
Posted by Gordon Cheng at 06:17 1 comment:

Jaywalking. I know I shouldn’t but I do. It saves time, keeps me alert, stops people from confusing me with a role model, and develops reflexes and anticipation. For no good reason at all I thought this morning of a late night schtroll in Berlin-Spandau, back in December 1992. As I crossed the strasse against the lights I heard a guttural Teutonic voice bark out “Halt!”

I looked over my shoulder expecting to see a German in a uniform, but saw instead a middle aged man in a hat. I accelerated from a saunter to a walk. If I’d stopped as he commanded I could’ve been hit by a car. What was he trying to do, kill me?

At least I didn’t mention the war.
Posted by Gordon Cheng at 14:39 1 comment: